Managing, repairing, and monitoring the service

The DC/OS Kafka ZooKeeper service provides a robust API (accessible by HTTP or DC/OS CLI) for managing, repairing, and monitoring the service. Here, only the CLI version is presented for conciseness, but see the API Reference for HTTP instructions.

An instance of the DC/OS Kafka ZooKeeper service is ultimately a set of plans (how to run the service) and a set of pods (what to run). The service is driven primarily by two plans, deploy and recovery.

The deploy plan is used during initial installation, as well as during configuration and service updates. The recovery plan is an always-running plan that ensures that the pods and tasks that should be running, stay running. Other plans (“sidecars”) are used for secondary operations.

Every plan is made up of a set of phases, each of which consists of one or more steps.

A list of plans can be retrieved using the CLI command:

View the current status of a plan using the CLI command:

For example, the status of the completed deploy plan of the service will be:

NOTE: Passing the --json flag to the status command will return a JSON response which has UUIDs for the phases and steps of a plan. These UUIDs can be useful in the other plan commands.

Operating on a plan

Start a plan with the CLI command:

Pauses the plan, or a specific phase in that plan with the provided phase name (or UUID).

Stops the running plan with the provided name.

Plan Stop differs from Plan Pause in the following ways:

Resumes the plan, or a specific phase in that plan, with the provided phase name (or UUID).

Force completes a specific step in the provided phase of the plan. From the CLI it is only possible to force complete a step. The HTTP API supports force completing on phases and plans in their entirety.

A deployed instance of the DC/OS Kafka ZooKeeper service is made up of a set of running pods. Using the pod API, it is possible to manage the lifecycle of these pods as well as investigate failures of the pods and their tasks.

NOTE: Managing pod count is done via the service configuration and does not have a direct API.

To list all the pods of the service run the CLI command:

To view the status of all pods or optionally just one pod run the CLI command:

This will show any status overrides for pods and their tasks.

To restart a pod in place, use the CLI command:

This will kill the tasks of the pod, and relaunch them in-place. The progress of the restart can be monitored by watching the recovery plan of the service.

Issue a replace by running the CLI command:

Pausing a pod relaunches it in an idle command state. This allows you to debug the contents of the pod, possibly making changes to fix problems, while still having access to all the context of the pod (such as volumes)

Using pause and dcos task exec is a very powerful debugging tool. To pause a pod use the CLI command:

To pause a specific task of a pod append the -t <task-name> flag,

Use the pod status command to check what tasks and pods are in an overridden state.

To resume a paused pod or task use the CLI command:

Check the pod status command to verify that the pod (or task) has properly resumed.

A service’s logs are accessed by selecting the service in the Services tab. Both the service scheduler and service tasks are displayed side by side in this view. To view the tasks sandbox (files) as well as its stdout and stderr, click on a task.

Access both the files and logs of a service by clicking on its sandbox link.

The dcos task log subcommand allows you to pull logs from multiple tasks at the same time. The dcos task log <task-pattern> command will fetch logs for all tasks matching the prefix pattern. See the help of the subcommand for full details of the command.

Occasionally, it can also be useful to examine what a given Mesos agent is doing. The Mesos Agent handles deployment of Mesos tasks to a given physical system in the cluster. One Mesos Agent runs on each system. These logs can be useful for determining if there is a problem at the system level that is causing alerts across multiple services on that system.

Mesos agent logs can be accessed via the Mesos GUI or directly on the agent. The GUI method is described here.

Navigate to the agent you want to view either directly from a task by clicking the “Agent” item in the breadcrumb when viewing a task (this will go directly to the agent hosting the task), or by navigating through the “Agents” menu item at the top of the screen (you will need to select the desired agent from the list).

In the Agent view, you will see a list of frameworks with a presence on that Agent. In the left pane you will see a plain link named “LOG”. Click that link to view the agent logs. 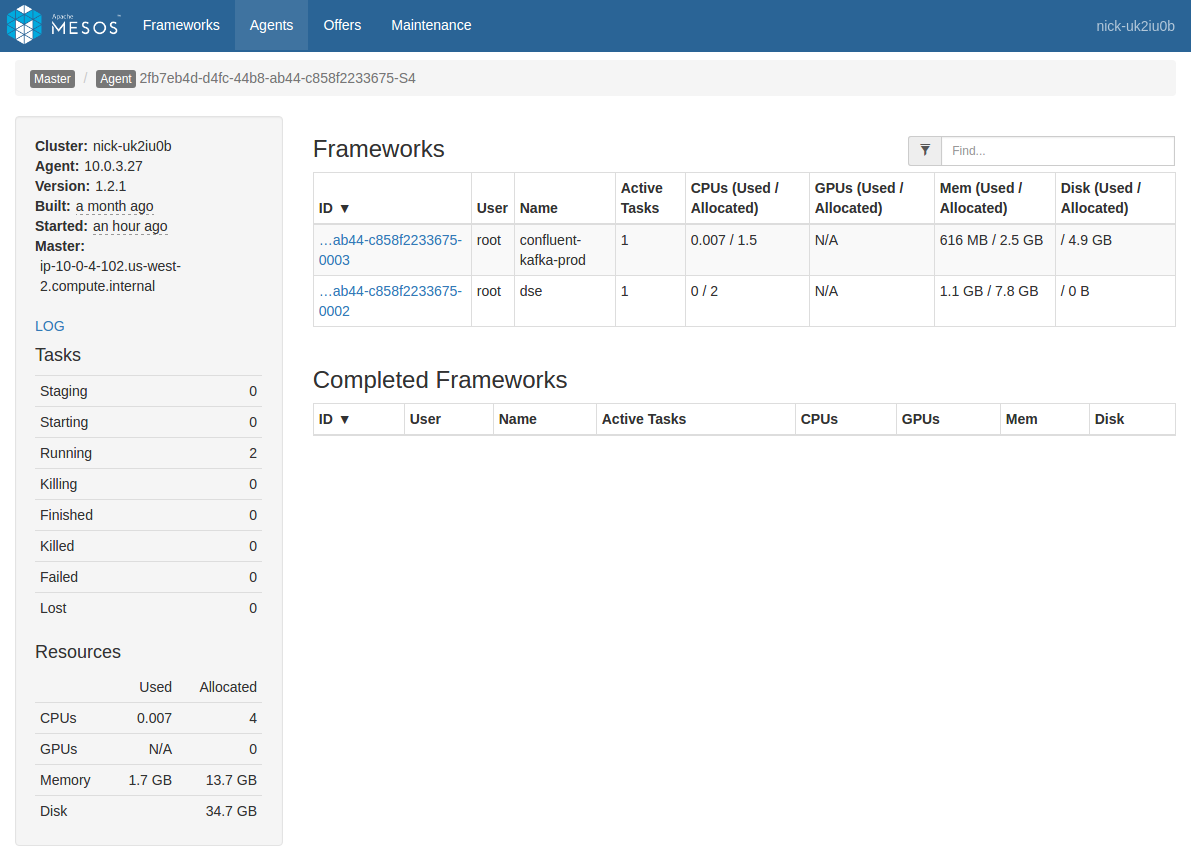 Use the task exec utility to go directly into the Mesos sandbox of a node.

This command puts you in your Mesos sandbox in an interactive bash environment. From here, go into the zookeeper-data-path or zookeeper-log-path directory and cp or scp files to a desired location, preferably one away from the network, in case of outage.

It is recommended to keep three to five of the latest, desired log files in case the restored log file restores the ensemble to an invalid state with ephemeral nodes. You can update ZooKeeper-specific configurations like autopurge.Interval to manage the purging of superfluous files.