DISCLAIMER: This is a community driven project and not officially supported by Mesosphere. This installation method is used for fast demos and proofs of concept. This page explains how to install DC/OS cluster on Azure using Azure Resource Manager templates. This method is intended for reference only and are not recommended for production use. Upgrades are not supported with the following installation methods.

To use all of the services offered in DC/OS, you should choose at least five Mesos Agents using Standard_D2 Virtual Machines, which is the default size in the DC/OS Azure Marketplace offering. Selecting smaller-sized VMs is not recommended, and selecting fewer VMs will likely cause certain resource-intensive services such as distributed datastores to work improperly (from installation issues to operational limitations).

These recommendations are based on operation of multiple DC/OS clusters over many years, scaling a mix of stateful and stateless services under a live production load. Your service mix may perform differently, but the principles and lessons discussed herein still apply.

We recommend disabling swap on your VMs, which is typically enabled by default for Azure Linux images. We have found that using the ephemeral SSDs for swap (via WAAgent configuration) can conflict with the disk caching configuration of the D series of VMs. For other VM series, such as the L series, it may be possible to use the SSDs for swap and other purposes. See the following section for particulars on disk configuration.

Monitoring (such as Node Exporter with Prometheus) should be used to identify and alert as to when workloads are nearing Azure defined limits.

On Azure, raw network performance is roughly determined by VM size. VMs with 8 or more cores such as Standard_D8_v3, are eligible for Azure Accelerated Networking (SR-IOV). We have seen much lower latency and more available and stable bandwidth using SR-IOV as opposed to relying on the Azure hypervisor vswitches. For example, in our testing, a Standard_D16s_v3 without SR-IOV can push approximately 450MB/s of data between two VMs, while the same size machines can push closer to 1000MB/s of data using SR-IOV. Thus, SR-IOV should be employed when possible and you should benchmark your instance sizes ((for example, using iperf3) to make sure your network requirements are met.

Additionally, while multiple NICs per virtual machine are supported, the amount of bandwidth is per-VM, not per NIC. Thus, while segmenting your network into control and data planes (or other networks) may be useful for organizational or security purposes, Linux level traffic shaping is required in order to achieve bandwidth control.

On Azure, Premium SSDs have a limited number of possible synchronous IOPs, limited by the latency of the underlying disk fabric. Services such as etcd, Zookeeper and databases which use a write-ahead-log (WAL) are particularly sensitive to this I/O configuration. Thus, much of the system engineering described herein is focused on minimizing and/or eliminating I/O contention on the Azure Disks.

Additionally, exceeding the I/O allocation on a machine will result in throttling. Users are advised to study this article in detail to understand the theoretical background of the recommendations herein.

Given the need to separate synchronous from asynchronous I/O loads in order to maintain performance, the following disk mounting configurations are recommended:

It is certainly possible to run clusters with smaller and/or fewer disks, but for production use, the configurations above have proven to have substantial advantages for any non-trivial cluster sizes. Additionally, we recommend attaching appropriate Premium SSDs to /dcos/volume0 ... /dcos/volumeN using Mesos MOUNT disk resources, which can then be dedicated to data intensive services without I/O contention.

For data intensive services such as Postgres or mysql, you should consider attaching LVM RAID stripes to those MOUNT resources to increase the possible transactions per second of the databases.

With respect to configuring the disk caches, the following general rules apply:

You will need an active Azure subscription to install DC/OS via the Azure Marketplace.

Also, to access nodes in the DC/OS cluster you will need ssh installed and configured.

To install DC/OS 1.13 on Azure, use the Azure Resource Manager templates provided.

Some notes on the template configuration: 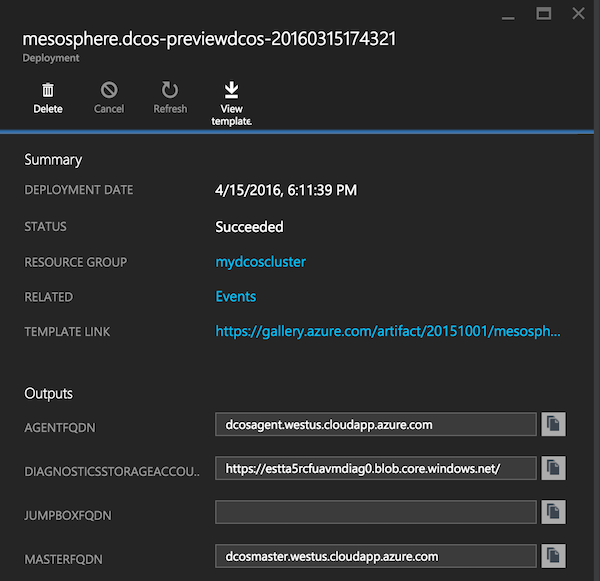 In order to visit the DC/OS Dashboard, you will need to access TCP port 80 or 443 of the master node. You can add an inbound security rule and an inbound NAT rule. 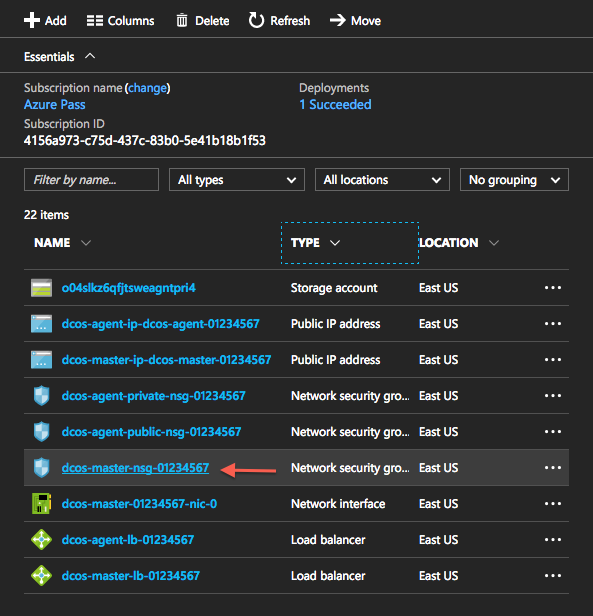 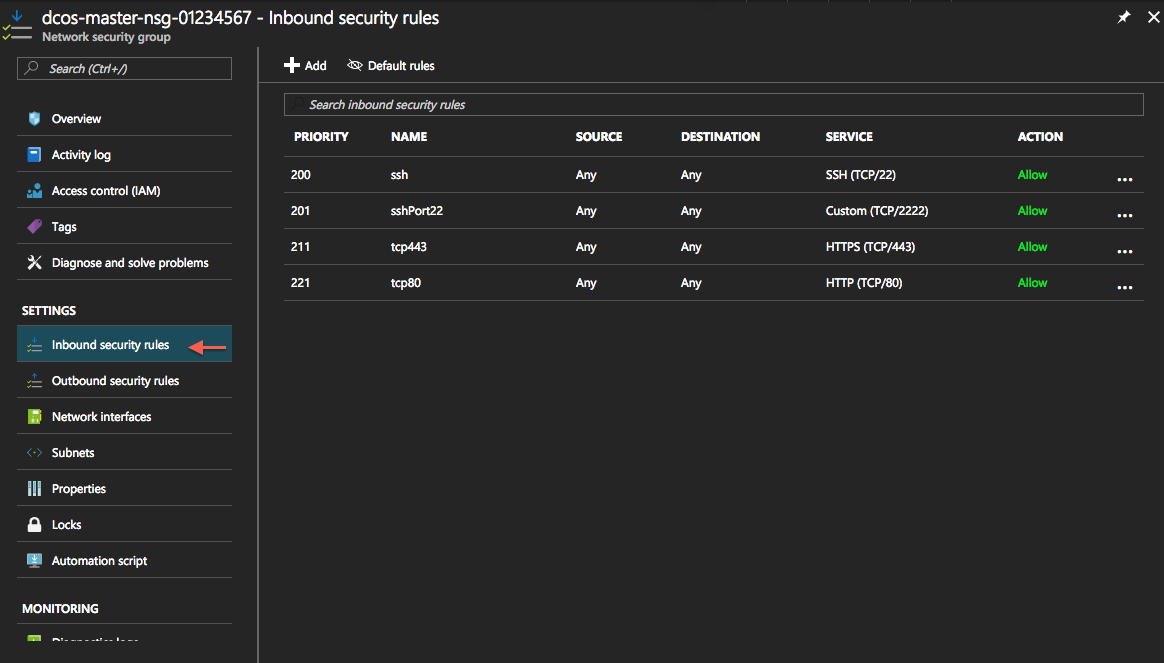 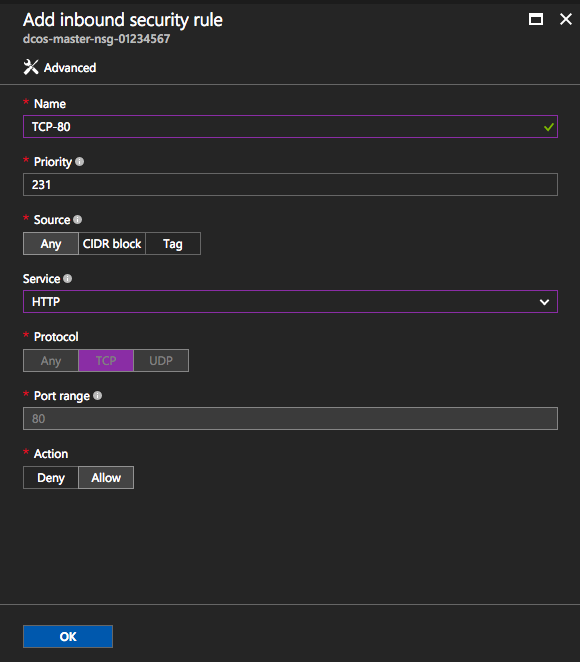 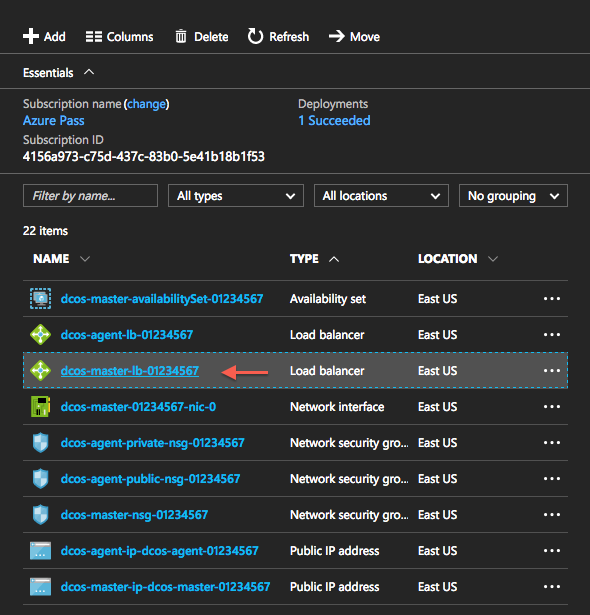 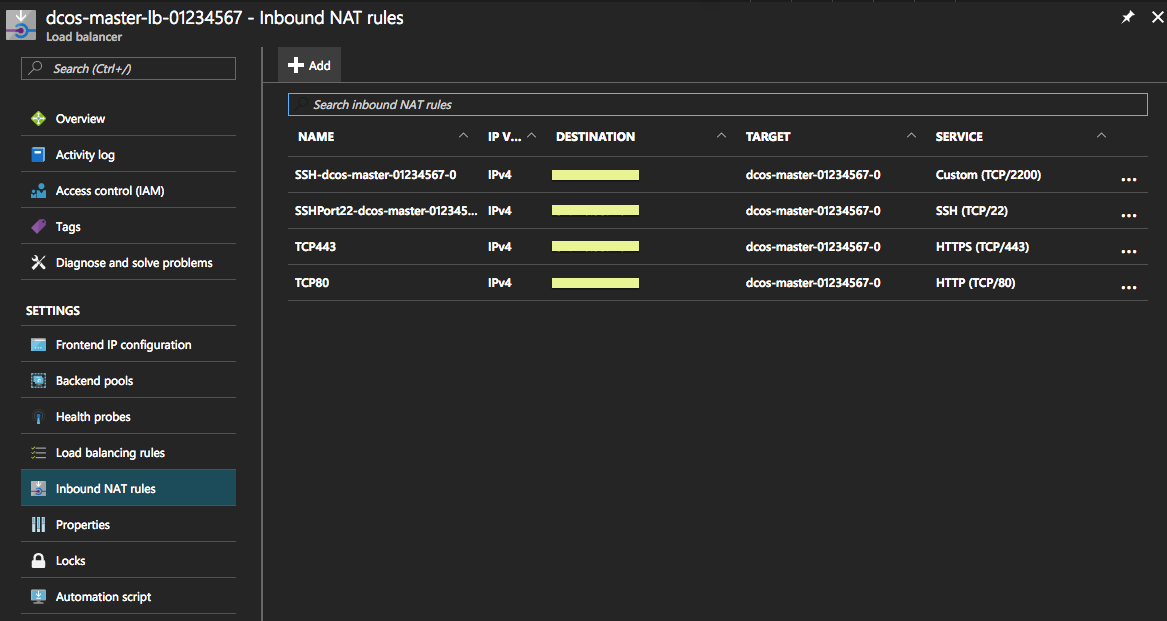 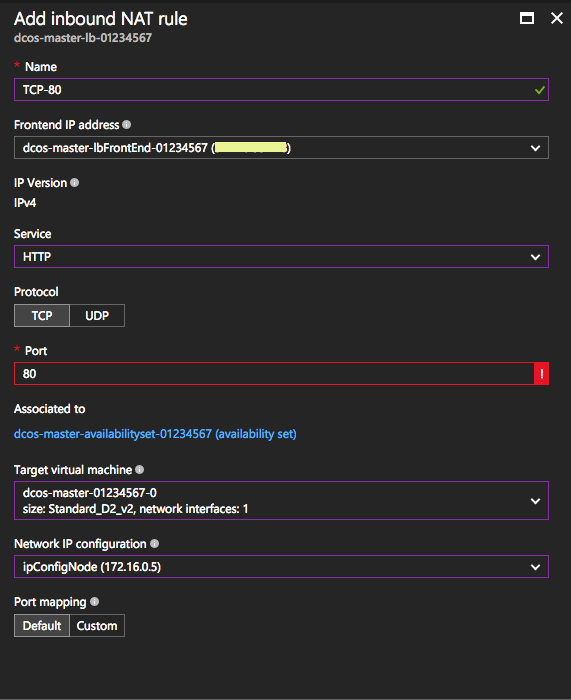 Now you can visit http://$MASTERFQDN and view the DC/OS Dashboard.

In this case, we need to setup an SSH tunnel, to forward TCP port 80 of the master node on the Azure cluster to the 8000 port of your local machine.

Copy the value of MASTERFQDN you found in the previous step and paste it in the following command:

Now you can visit http://localhost:8000 on your local machine and view the DC/OS Dashboard. 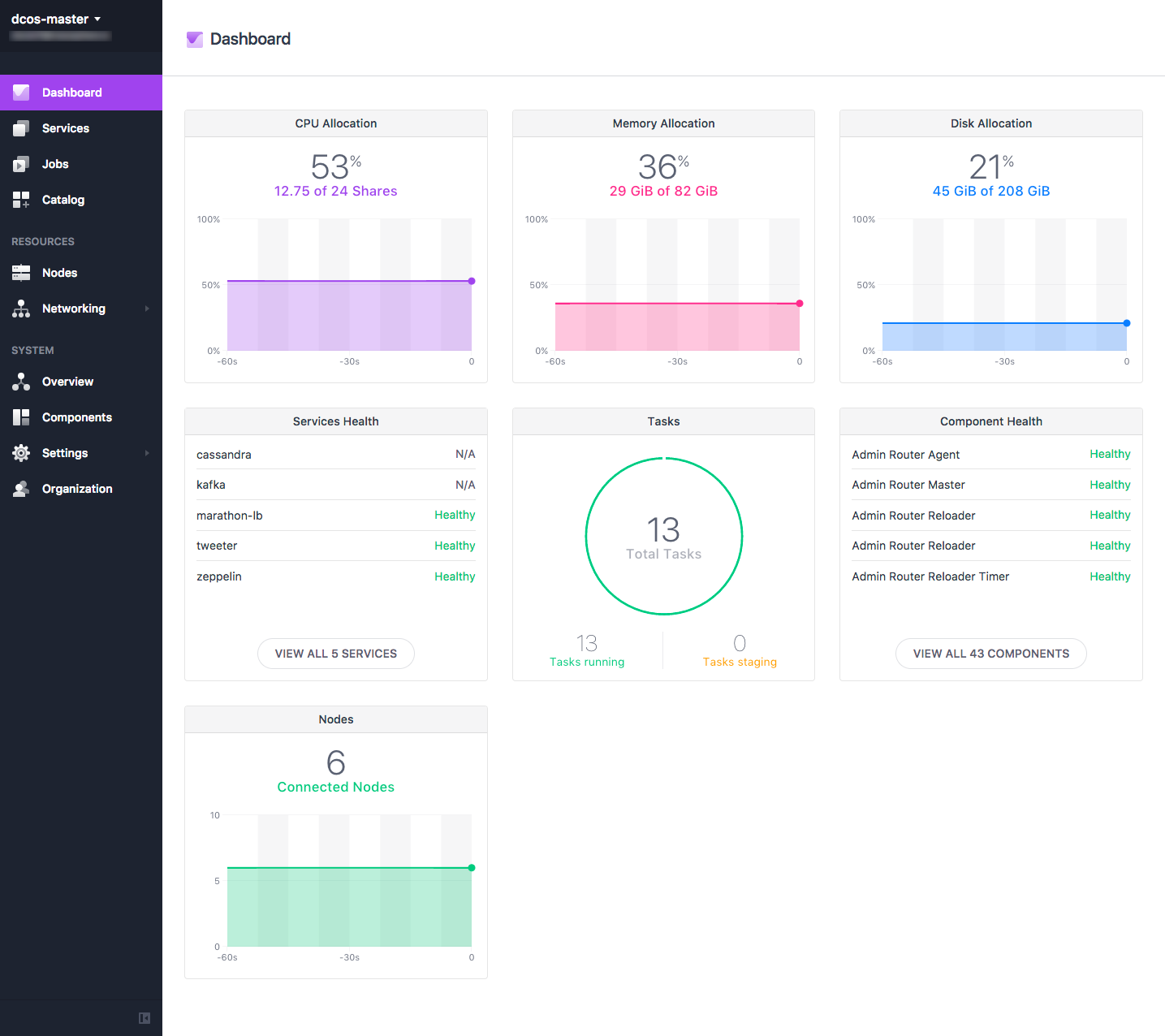 The DC/OS UI will not show the correct IP address or CLI install commands when connected by an SSH tunnel.

The following commands can be used to run the DC/OS CLI directly on the master node.

Tear down the DC/OS cluster